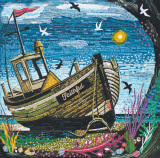 The Sea The Sea Gift Card

This is my gift card called 'The Sea, The Sea' made from the words of the poem - The Sea by Barry Cornwall.They are square shaped 148mm x 148mm in size.

My artwork is made using collage techniques using the words of poems that inspire me. In this 'Boat Series', the coastline of the United Kingdom and fishing vessels were the inspiration. Words from the poem are ripped, torn, cut and collaged to make up the final image. Some parts of the poem can also be read.

The Sea! By Barry Cornwall

THE SEA! the sea! the open sea!

The blue, the fresh, the ever free!

Without a mark, without a bound,

It runneth the earth’s wide regions round;

It plays with the clouds; it mocks the skies;

I am where I would ever be;

With the blue above, and the blue below,

And silence wheresoe’er I go;

If a storm should come and awake the deep,

What matter? I shall ride and sleep.

On the fierce, foaming, bursting tide,

When every mad wave drowns the moon

Or whistles aloft his tempest tune,

And tells how goeth the world below,

And why the sou’west blasts do blow.

I never was on the dull, tame shore,

But I lov’d the great sea more and more,

And backwards flew to her billowy breast,

For I was born on the open sea!

The waves were white, and red the morn,

In the noisy hour when I was born;

And the whale it whistled, the porpoise roll’d,

And the dolphins bared their backs of gold;

And never was heard such an outcry wild

I ’ve liv’d since then, in calm and strife,

With wealth to spend and a power to range,

But never have sought nor sighed for change;

And Death, whenever he comes to me,

Shall come on the wild, unbounded sea!

The Sea The Sea Gift Card